On with the photo montages!  Thanks everyone for your warm response to yesterdays posting.  Here’s the second half of the year.

Starting with this photo of the meadow at High South.  The first one is from early July, and the second was from yesterday.

This one’s pretty amazing.  It’s kind of hard to believe that these two photos are from the same spot– the flowing creek and little orange chanterelles from July are quite a contrast with the barren icy bleakness of January.

Another photo from the pond– not much left from July’s lillies.

I’m not sure which of these two pairs of photos I like better, so I’ll post them both.  The contrast of colors at this one particular spot in the creek are striking!

The first photo in each of these pairs was from back in August, when the garden was in full swing.  Not much growing there in mid-January. 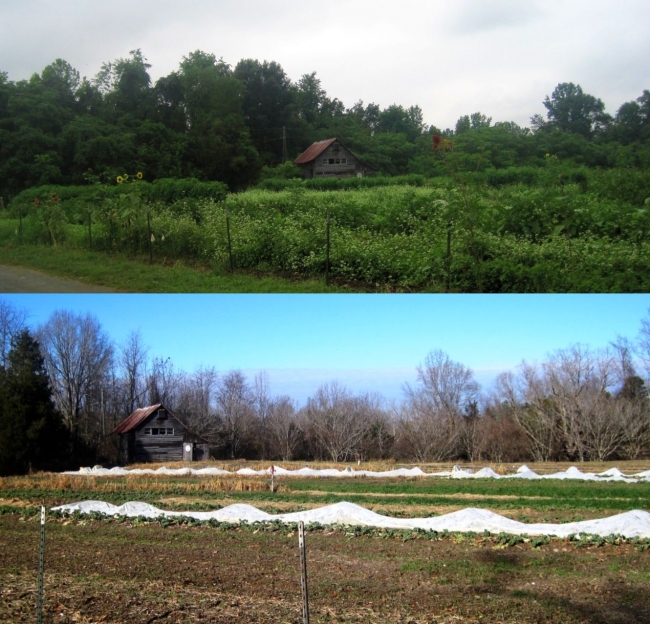 Although not in the same exact spot, both of these photos were taken in the graveyard.  The first was also from August.

Quite a difference in the Kaweah backyard orchard between late August and now.

Some more pond photos.  Again, the first photo in both of these pairs was taken in late August.

It’s nice to look at all the dead gray vegetation and know that in a few months, there will be flowers blooming.

Three photos of the flowform– the first was from August, right after I cleaned them.  The second was in November, after we’d had a few killing frosts, and the third was taken yesterday.

I especially like this pair.  In the first photo from September, you see the limit of the annual growth of our banana tree.  At this point, we were about a month away from our first frost.  Not much of the tree is left in January, but the roots and base of the stump survive to grow again in the spring.

Three views of the pasture above the pond; September, November, and January.

In Septemer, masses of yellow Goldenrod lined the roads.  If you look closely, you can still see the dried up flowerheads.

Which is more than you can see in the more tended flowerbeds.  I remember being impressed that there were still so many September flowers in bloom in the MT garden (first set of photos) and the triangle garden at the end of the driveway (second set of photos).  Nothing is blooming this time of year.

One last set of photos from September, showing the courtyard as seen from the cow pasture below.  It was hard to get this photo in January, since if you’re looking to the South, everything is so backlit with low winter light.

October and November gave us some beautiful displays of leaf color.  Here are the trees out in front of my house in late October, and again yesterday.

And here’s a fairly striking view of the backyard orchard.  In the top photo, the first frost had killed the leaves on the fig trees less than a week earlier.  In the lower photo, several days of single-digit cold may have killed most of the figs’ above-ground branches as well.

Well into November, there were places in the community where the leaves were pretty spectacular.

This Japanese Maple was in full color a couple of months ago.  It’s hard to believe it’s the same tree now.

And that’s all I’ve got for photo mash-ups.  I was planning on writing some sort of tearful eloquent farewell and calling it a year, but the hour is getting late, and I’m not ready to “pull the plug” just yet.  So I guess I’ll have to keep ol ObserVA alive for at least one more post.  Thanks for all the positive feedback on the last group of photos that I posted yesterday.  Till next time…