And just like that, the Winter solstice, the shortest day of the year and official beginning of winter, has come and gone.  It’s been a wet, blustery, decidedly un-winterlike few days.  But I’m getting ahead of myself.  Let’s go back a few days…

to Saturday afternoon, just after lunch.  With a free hour before ultimate frisbee, I was going to take a little walk to explore the woods over on the river side of the property.  At this point, we’d had over 48 hours without frost, for the first time in weeks, and I was curious to see if this spell of near-tropical weather had made any difference in the landscape.  At the time I took this photo, it was just past one in the afternoon, but as you can see, the shadows were already long on the shortest day of the year.  I was, if you can believe it, dressed in shorts and a thin cotton long-sleeve t-shirt; the temperature (on the first day of winter) was close to 70 degrees!

Not much green in the forest, save for these rhododendrons.

On a damp, north-facing slope, I came across the best-looking oyster mushrooms I’d seen in weeks.  I’ve been trying to complain too much about the scarcity of oysters this fall, but by comparison, I had filled grocery bags with oysters on multiple occasions last November and December.  These were the first oysters this fall I’ve found that were worth picking.

Another nearby stump had a whole cluster of beautiful orange shelf mushrooms growing on it.  Very striking color of shelf fungus.

I walked for a while through the riparian forest, traveling fairly easily through forest that would have been very unpleasant and difficult to navigate a few months back.  Eventually, I came to a waterlogged part of the woods looked to be quite the muddy, quicksand-y quagmire, and I turned back towards higher ground.

With a few days of warm weather, I’m starting to see a few mushrooms that haven’t come out for quite some time.  These orange ones are most likely deadly poisonous, but I thought they looked cool. 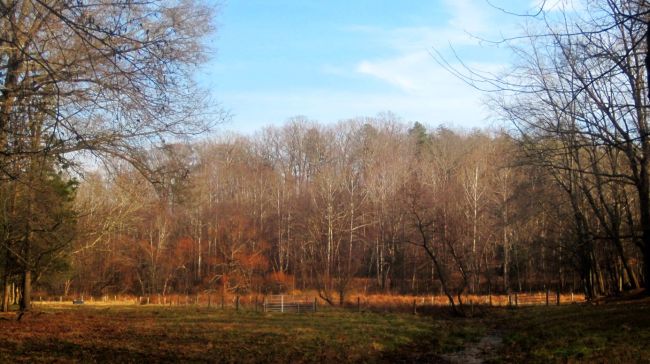 At one point, I was examining some large crow feathers I found on the ground, and next to them was this stick that looked like it had some weird alien message carved into it.

Passing through the beefy field.  Already this season, we’ve turned a couple of the steers into meat, and these guys probably won’t last the winter.

It was such a delightful change of pace to really enjoy the warmth and sunshine; I didn’t even mind the incongruity of walking around in shorts on the first day of winter.

About a week ago, we slaughtered our first steer of the season here on the farm.  Although we do save some of the organs (liver, heart, tongue), there’s still a lot of cow innards that we don’t use.  Mostly, we dig a great big pit and spend the winter filling it with offal, then cover it up in the spring when we’re done slaughtering.  Quite a sight to come across!

By the time the afternoon frisbee game got underway, clouds had begun to roll in, darkening what had been a ridiculously lovely solstice day.  It was still the warmest frisbee game we’d had in the past six weeks.

The first oysters I’d harvested in weeks.  Not a huge quantity, but I was pretty pleased just to have these few. 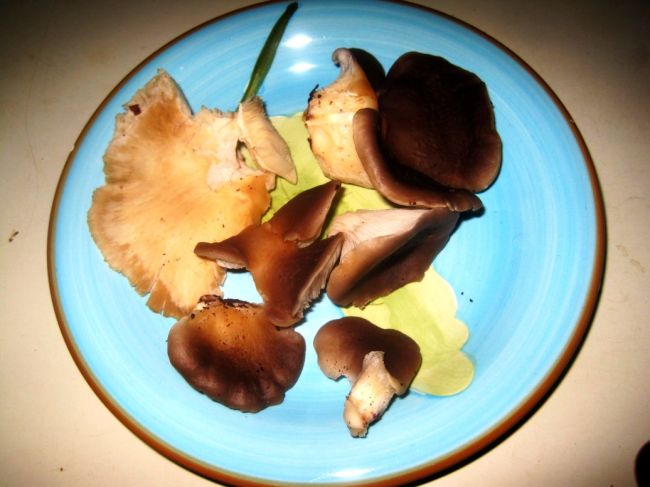 I also came across several logs in the woods full of oyster mycelium, with tiny mushrooms just starting to grow.  I have been stacking these logs in a pile in the woods just a few steps from my back yard, hoping to create a little oyster patch that is easily accessible from my kitchen.  Here are a couple of baby wild oysters growing alongside some little ones growing from a log that I inoculated this spring.

Another shot of basically the same thing, taken from a different angle.

Sunday was forecast to be even warmer, sunny with temps in the mid-70’s!  I was looking forward to an unbelievable day.  As it turned out, we got torrential rain in the morning– a weird line of thunderstorms that looked and felt just like a summer shower.  Definitely weird weather for the first day of winter.  Well over an inch of rain by noon, when I took this photo of the back yard.

The rain and over-freezing temperatures continued all day and overnight.  This morning, I figured the conditions were as good for oyster mushrooms as they were likely to be, so I put on my raincoat and stepped out into the wet.  Here’s the streambed just off of my back yard, which is often dry but was full of water this rainy morning.

As expected, I came across several logs sprouting abundant young oysters.  Many of them were too small to be worth harvesting, but I did take careful note of where they were growing, and I hope to come back and pick them before the next frost, forecast for Tuesday night (and just about every night after that for the rest of the season).

I also carried more logs back to my mushroom pile, which has been growing by the hour.

Here’s the current state of my wild oyster mushroom project.  I’ll probably sterilize a bunch of sawdust and dump it in-between all the gaps in the logs.

Afterward, I took a walk through an area of our forest that had recently been thinned by the forestry team, just to see if there were any oysters growing on the trunks or stumps that were being harvested (there weren’t).  Out in the woods, I came across this very cool sight, where a dead standing tree had been cut at from both sides, leaving an eight-foot high wooden spike pointing into the sky.

Here’s the same thing, photo taken from the side.  I hope they leave it in place, as it’s very cool looking. 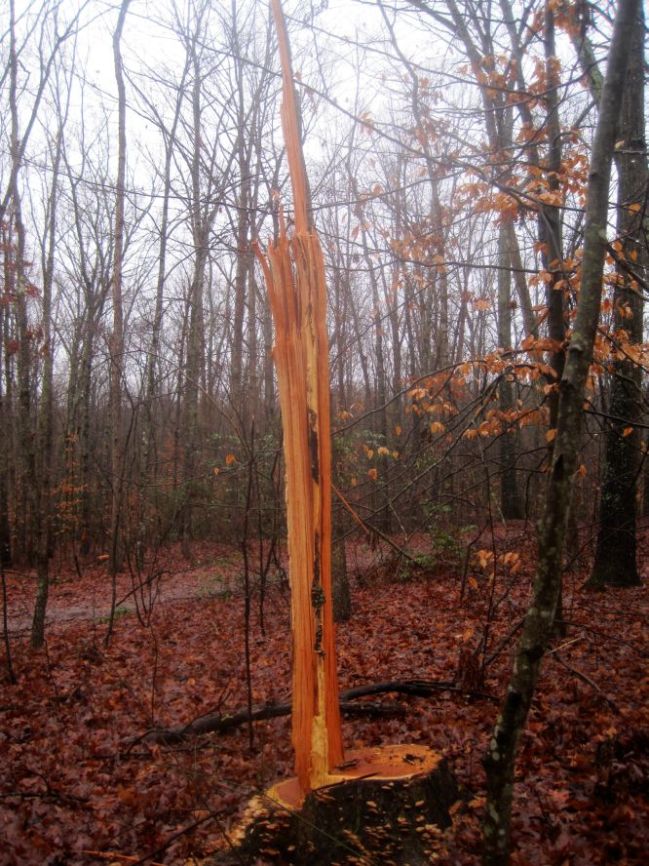 I also spent some time examining some logs that have been stacked for cutting and splitting, noticing all the brand new fungal growth that’s sprouted up just in the past week.  All sorts of cool colors and shapes in the warm wet conditions.  I haven’t seen any cut pieces with oysters growing on them this year, but I have noticed them in the past. I figure that such pieces are too valuable to simply burn for warmth, instead it would make more sense to put them in the mushroom pile I’m growing.  I’ll keep looking as the forestry season progresses.

a close-up.  Lots of fungal growth just in the past 24 hours or so.